Brand awareness requires readily identifiable trademarks.  And yet there exists a challenge in rendering a trademark visible without making it gaudy.  The symbols of car manufacturers capture that balance perfectly.  The crass advertising of car dealerships, meanwhile, tends toward the gaudy.  But perhaps international car manufacturers have an unfair advantage because a high extant brand awareness makes their flag require nothing more than symbology whereas local entities have to carry more information on their signal.

A related challenge consists of documenting the identity of a given artifact so that one might purchase a duplicate.  Perhaps you bought something years ago for your home and would like another.  Or maybe you’ve seen something in a friend’s house and would like one of the same.  How maddening it is, then, not to be able to find any manner of key with which to look up the product’s identity.  Thus sales are lost.

This led me to buy some handily configurable cable sleeves from Baltic Living.  You can get a pack of five sleeves that you can either chain together mooshing one’s end inside another before zipping it up or zip together side-by-side to “trunk” them into a higher capacity sleeve.  Simple.  Elegant.  Solid.

Very sensibly they put their company’s name on the product. 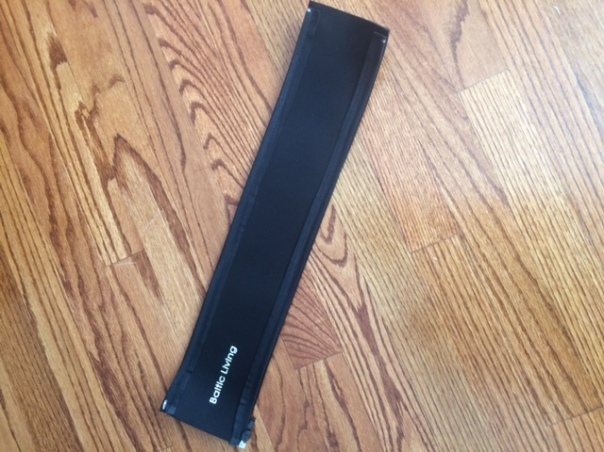 A more difficult decision was perhaps deciding where to put it.

They opted to make it visible when the product is in the process of being assembled but not when it is in what will be its long-term state.  This has the trade-off of rendering the product more tastefully “quiet” in its ongoing state of use but at the cost of making the trademark invisible at most times.  One wonders how conscious a decision this was.  Would it have been obnoxious to put the company’s name on the outside of the sleeve?  Maybe so…  Was there a compromise to be had?  Perhaps…  What if they had embossed the trademark in the same color as the sleeve?  That seems like it might have worked well but would it have been cost prohibitive to perform the five embossings for the five-pack that only retails for $15?  Maybe…  And meanwhile there is no product identifier, a matter of perhaps little importance for a company that sells so few product types, but something that could become a larger issue if they expand their line.