Today the insectronic chassis went together. This entailed cutting three 3 3/4″ long and two 6″ long pieces of 1/2″ aluminum bar and subsequently drilling an assortment of 5/32″ holes (and one 1/4″ hole) in them as well as cutting a couple of 1/4″ by 1/4″ stand-offs from aluminum tubing. I wasn’t a very good metal smith at the beginning of this and I’m a slightly less terrible one now. Slightly…

My second failure was using a marker to record where I wanted to drill. This was too sloppy for an accurately placed hole. After some less than satisfactory results I switched over to using a hole punch “screwdriver”. This yielded superior results. 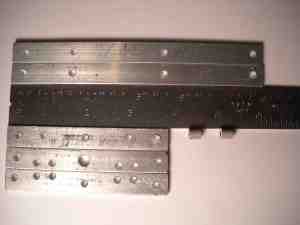 My third near failure involved an inability to appreciate basic physics when cutting the aluminum tubing to size for the stand-offs. I’m not sure there is a safe/effective way to cut short lengths of aluminum tubing with a bandsaw, but I managed to do it anyway. The first attempt, I didn’t have a grip on both sides of the tubing so the severed piece went flying; it didn’t hit me (I was wearing goggles anyway), and I didn’t put my finger through the blade when flinching, but I was unhappy with myself. The second attempt, I held onto both sides of the tubing but felt that one of my fingers was uncomfortably close to the blade (though I was wearing gloves). The third attempt, I decided to use a pair of pliers to hold the short end of the tubing, and this felt a little safer, but I was still concerned about goofing and letting the pliers hit the blade.

I attached the aluminum and two CS-60 X Hobbico servos using a combination of 1/2″ and 3/4″ 6/32 screws, lock washers, and nuts. The end result was not a flawless work of beauty, but it did fit together, an outcome that was in no way guaranteed. 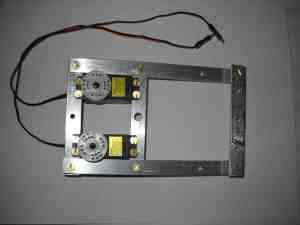 I believe I’m good to move on to the next step, constructing the middle leg servo mounts.